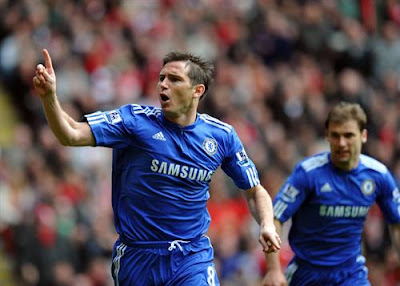 Another game against the top four and another victory means that Chelsea now have one hand on the title. Chelsea now have won against all the top four sides this season conceding just one goal. In most cases that would be enough to win the title. But United’s victory over Sunderland means that the fight for the title goes to the last day of season. Chelsea can win the title by winning the game against Wigan and it doesn’t matter what Manchester United do against Stoke. Alex Ferguson before the game suggested that Liverpool should not roll over against Chelsea because of their history and tradition. True to his words, Liverpool did not roll over but simply got beaten by a better team. This result also means that Liverpool won’t be playing in the Champions League next season.

The start was not as comfortable as the result says as Liverpool were clearly the better team in the first 20 minutes. Chelsea were not playing well in the final third and it was probably due to the pressure as
a lot rested upon this match. But things changed when a certain Gerrard sent Chelsea on the way with a horrible back pass to Reina which was intercepted by Drogba. Conspiracy theorists might say that he did it on purpose. But looking at the replay it was pretty clear that he was not aware of Drogba’s position. But once Drogba scored the goal that took him level with Wayne Rooney on the scoring charts the players never looked back. The impetus for Chelsea’s play started only when Kalou who was playing in the right wing up until then was switched to the left, where he tormented Mascherano all day. There were two very good chances which Lampard and Anelka failed to take. The referee then failed to give a clear cut penalty after Kalou was brought down by Lucas at the death in the first half.. 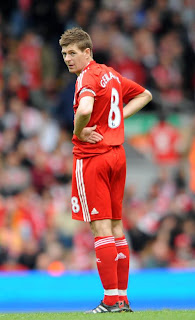 The second half was quite easy as Anfield was very quiet and Liverpool without their 12th man were very lacklustre and failed to materialize any kind of threat. Tiredness also crept in for them during the latter stages and when Lampard turned in an Anelka cross for his 26th goal of the season the game was pretty much over. 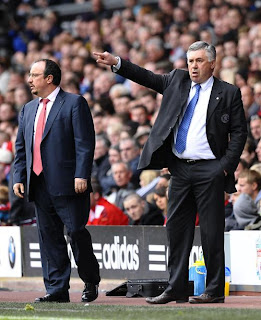 So, 37 games have not been enough to decide a winner and the last day of the season is now going to decide the winner of the Barclays Premier League 2009/2010. Both Chelsea and Manchester United are at home to Wigan and Stoke respectively. Wigan were the side that gave Carlo Ancelotti his first defeat as Chelsea manager. I am sure Ancelotti will not be suffering the same fate again especially given that Wigan are playing away from home. But in the Premier League, no game is an easy game and the players have to focussed and repeat the performances in the last two games. United on the other hand have less pressure on them because all they can do is win their game in hand and hope Chelsea drop points. It has been a magnificent season and were Chelsea to win the title they can be called the worthy winners.

Man of the Match:

It has to be Lampard. He was excellent in midfield and proved that he is better than Gerrard yet again. And he also scored his 26th goal of the season, something strikers can boast of.