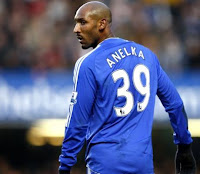 Anelka has extended his Chelsea stay by another year after much speculation that he would move on in the steps of Cole and Ballack. But the 31 year old Frenchman has signed a one year extension to the contract. Branded the ‘Sulk’ by the press, he has shown incredible character to play for one of the big teams in Europe once again after previously failing with stints at Arsenal and Real Madrid. He has not always been the first choice. Nor has he been played in his favourite position. But he has learnt to accept his role within the team
and has performed admirably.

‘When I first came to Chelsea I wanted to stay much longer than what I did in the past with other clubs. It is a big club, you play with big players and I like this club, I like London. There is no need to move anymore and so I am very glad to sign a new contract and I know we will play in big games and win titles. I am very glad.’

Anelka won both the Premier League and the FA cup last season becoming the first player along with Ashley Cole to do it with two different clubs, Arsenal and Chelsea. He also won the Golden Boot in 2008 by beating Cristiano Ronaldo to the award. Ancelotti recently praised him for his teamwork and after signing the contract, he said,

‘When I was coach at Juventus I wanted to buy him, so it is good now he has signed for me and I think Chelsea is his home. I look forward to working with him for one year more.’

Anelka has made 123 appearances since signing from Bolton in a £15 million deal and is without doubt growing to one of the important players in the squad.