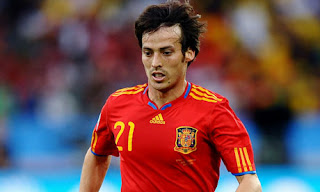 Since the World Cup started a few weeks ago, there has been very few news that featured clubs and even fewer transfer news. But in what seems like an oasis in a desert, David Silva becomes the latest player to be linked with Chelsea.

As always when Chelsea are linked with a player, there will always be Manchester City sniffing around like a hyena to pounce on for a free meal. This time it is no different as Chelsea and Manchester City are the only two clubs involved in the race to
sign the Valencia star. Manchester United who were mentioned several times last year to sign him, don’t seem to be interested this time around. Silva is currently with the Spanish National team in South Africa. He was in the team that suffered the shock 1-0 defeat to Switzerland.

Will Silva work out for Chelsea? I don’t think so. Silva is a left winger who can play on either flank but is more comfortable on the left. In Spain’s last match, he played on the right side while Iniesta played on the left wing. He is an incredibly tricky winger and has an eye for goal as well. His technique is second to none, but that is also the case with every member of the Spanish National squad. At 24 years of age, he is exactly the player that Chelsea need at the moment. Yet, I think he will not work out. Why?

Valencia are reportedly asking for £34 million for him and there is still wages to pay, and that will be around £5 million a year. Though Abramovich is willing to sanction a huge amount for a marquee signing, he is not the marquee signing needed at the moment. Especially considering how well Malouda finished last season, it will disrupt the harmony of the side by bringing in another player for the position. Silva, though technically gifted isn’t the strongest. And in the Premier League, you have to be strong to survive. Silva looks too frail for a midfielder.

So, Silva is definitely a no-buy at £34 million, but at around the £24 million mark, he is definitely worth considering. Even then, there are plenty of better and cheaper alternatives.