in Internationals June 19, 2010 Comments Off on World Cup Fails to Inspire 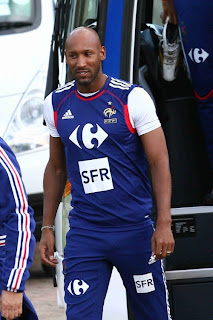 This is not exactly the World Cup I had in my mind a month ago. There has not been much to speak about except the odd result here and there and the possibility of big teams going out at an early stage. One of the big teams that could crash out are France. Following a dour opening display against Uruguay, their 2-0 loss to Mexico leaves their qualification hopes in tatters.

In the latest miserable news for French football fans, it seems that Nicholas Anelka will be sent home early after a reported bust-up with France’s under-fire coach, Raymond Domenech. Anelka was substituted at the end of the first half against Mexico. Anelka has reportedly insulted Domenech for this incident according to L’Equipe.

The French have continued their dismal showing from the Euro 2008 into the World Cup and given the latest results, it is likely that Anelka won’t be separated from his team-mates for too long.

France face an uphill task to make it to the next round. The fact that Anelka is going to be
missing for the last group game against South Africa is worsened by the fact that both Mexico and Uruguay can qualify by just drawing when they face each other. In simple terms, France’s future is not in their hands. If they fail to qualify they have themselves to blame. After a poor Euro 2008 and an even worse World Cup qualification campaign, it was clear that the problem lay with their coach, Domenech and they failed to address it.

It is not just France to be one of the big teams to be facing a struggle to qualify for the last-16 stages, but the likes of England and Germany also face uncertain futures. England and Germany must win their remaining games in order to sure of progress to the next round.

The World Cup is already proving to be a dull affair. One of the main reasons is the presence of 32 teams which has caused too many matches involving lesser teams. Don’t get me wrong, they are at the World Cup because they have earned the right to be there, but to be fair, everyone wants to see the likes of Wayne Rooney and Torres, not players playing in unknown leagues. And without special players like these, the World Cup won’t be special any more.

Some might argue that World Cup is not even special right now with the heavily criticised Adidas Jabulani balls. With only a few high scoring matches till date and an increase number of dull and uninspiring matches, the World Cup can only get better. Without big teams it certainly won’t do so.