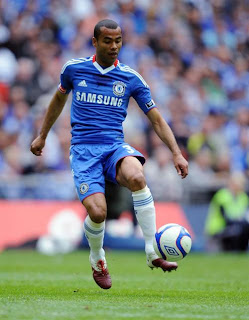 The World Cup is over and now the focus shifts back to the Premier League. But it is not exactly a welcome shift for Chelsea  fans as this transfer window has so far seen Chelsea let go of three important players and sign a single cheap replacement for them in the form of Yossi Benayoun. Now there seems as if there will be more transfer outs, as Ashley Cole is being strongly linked with Real Madrid. A few weeks ago, it was reported that Frank Lampard and Ashley Cole were targets for Real Madrid. But they seemed like press stories which come out when a new manager comes to a club and dies away eventually.

It has proved to be the case with Frank Lampard, but not with Ashley Cole. The Sun reports that Cole is a £30 million target for Real Madrid. Cole has always been a favourite of Jose Mourinho. Everyone knows the extraordinary lengths Jose went to have him signed for Chelsea back in 2006. It would be
daft to think that he would not do so now. Strangely, letting one of the best left-backs in the world leave has its merits.

He is one of the best left-backs in the world and I doubt anyone can argue with that. It was clearly visible how Chelsea struggled to get results for some time after he got injured during the Everton game in February. Some might even say that Chelsea could have made it past Inter Milan had he been playing. Such is his importance to Chelsea with his never ending forward runs. He is truly world class.

And ironically that is where the problem seems to start because at times he is so good that you will not notice the devil hiding within him. Over the years his actions have made him Enemy No.1 in the UK. There will not be any slip-ups for him in that status given his recent comments about English people. Real Madrid are reportedly willing to pay a transfer fee of £30 million for Cole who will be 30 soon and would be a shadow of his former self within a few years.

“I have only briefly spoken to people at the club but I am confident that he can be a Real Madrid player next year. I think it will be the right move for him both professionally and personally. A clean break from England is hopefully something he is very interested in. It will be his last big contract and who better to sign for than his old coach Mourinho at Real. Jose has proved he buys players and makes them the very best in the world in their position. With Ashley he doesn’t need to do that because he’s already the best left-back in the world.”

Real Madrid are a club with cash to burn. And if it is possible for Chelsea to get another £5 million then it would be the best possible decision for the club to sell him.

Chelsea have already lined up a transfer for the replacement of Cole in the form of Fabio Coentrao, 22, who impressed heavily during the World Cup with Portugal. Chelsea also have Yuri Zhirkov, who has not had much playing time since his transfer but is a more than a suitable replacement.

Selling him would be a wonderful piece of business for Chelsea but will losing four important players in Joe Cole and Michael Ballack who are already gone, Deco and Ashley Cole with strong possibilities of a transfer affect the team?