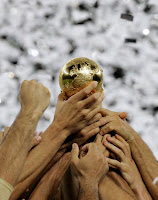 This may be a Chelsea Blog but you can’t really ignore the biggest match in world football, The World Cup Final. It literally doesn’t get any bigger than this. This has not been a great World Cup by any stretch of imagination and the best memory of this World Cup in a few years’ time will be the sound of the annoying Vuvuzela’s, but that does not mean that the Final has to be a poor one too.

The match between Spain and Holland has been billed as the match between the beauty and the beast. While it is something open to debate, one that is not is that these two teams have been the best teams not just in the tournament but also in their qualification campaigns. The Dutch have won all their games in the
qualifying and in the tournament so far without exception. The same can be said of the Spanish too who have showed no signs of slowing down after winning Euro 2008 in Switzerland.

Though the Dutch have won all of their matches up until now, they have not been entirely pleasing to watch or dominating either apart from a few minutes here and there. Wesley Sneijder along with Arjen Robben has carried the team after the group stages but if they are to edge past Spain then the key player will have to be Van Bommel. Should the Dutch win this tournament then they should be the worst Dutch team that could have won the World Cup because when you consider the likes of the 74 team with Cruff and the 80’s team with Van Basten, this team doesn’t come close.

That is not the case with the Spanish because they are widely acknowledged to be the best Spanish team and possibly the best national side ever. It is really surprising to think that a team with so many small players like Xavi, Iniesta and Puyol can be so successful in this era when power is the mantra. They have overcome their deficiency in size by their incredible technical ability. It is really frightening to see their possession statistics in matches. 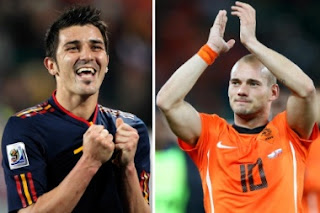 So, who will win ‘The World Cup’, the most prestigious tournament in the world? On paper and on the field the Spanish are miles ahead of the Dutch and they will have majority of the possession. But can Holland do what Germany did to them in 1974 when they were easily the best team of the tournament and Germany stole the Cup from underneath their noses?

Who do you think will win the World Cup?