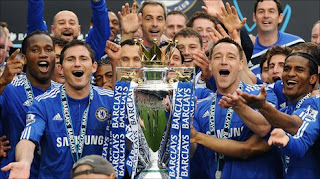 The best league in the world is finally back. The Premier League begins right here at Stamford Bridge when Chelsea start the title defence against West Brom.  Things may not have gone Carlo Ancelotti’s way in the pre-season, but he will be hoping that his player’s condition might have improved in the week gone by.

The last time Chelsea played at the Bridge, it was an 8-0 thrashing of Wigan. There are a good
number of reasons why that will not happen again. That is mainly because West Brom are a newly promoted side and even though they were in the Premier League just a season before last, they will be riding on a wave of adrenalin and the games are never easy against sides such as these.  Ancelotti said,

‘We know that not all the players are 100 percent but we are ready to defend the title, we have fantastic motivation to try to win again and I said last year that we had the possibility to open a cycle and we want to,’

The worst bit of team news before the match was that Frank Lampard has a knock in his ankle, which he suffered during England’s pointless friendly with Hungary. On the positive side, both Alex and Cech are back fit and ready.

The first five matches against West Brom, Wigan, Stoke, West Ham and Blackpool are all winnable games and Chelsea have to take the maximum points from these, less than that and it gives the rivals to make up the gap when tough fixtures come around later in the season.