Is Ancelotti aiming for the Champions League?

in Manager News, Pre-Season August 9, 2010 Comments Off on Is Ancelotti aiming for the Champions League? 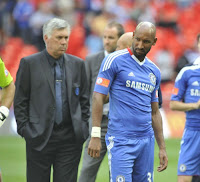 Chelsea have concluded the pre-season friendlies with a 3-1 defeat to title rivals Manchester United.  I am glad that it is over because I really struggle to think of a pre-season in the Abramovich era that is worse than this. A victory by a solitary goal against Crystal Palace was all that Carlo Ancelotti’s side could muster in the pre-season.

Even by pre-season standard this is poor. Ancelotti admitted a few days ago that Chelsea lacked fitness and that he expected things to improve in the near future.  There were no signs of it until the last 20 minutes
when Daniel Sturridge came on.

‘It was not a good pre-season. Now we must look forward to the Champions League and being top of the League,’

Ancelotti said. It is pretty clear from his words that after winning the double last season, he has only one thing in his mind, winning the Champions League. But is he right in choosing to sacrifice the League for a competition in which luck plays a crucial role?

I don’t think so. Especially with Liverpool’s takeover by another billionaire being imminent and Manchester City throwing cash all around. This is the year when the competition for the ‘Top Four’ is going to be the fiercest and it would be catastrophic for Chelsea to miss out on the Champions League place.

But Ancelotti still seems to believe in his squad. With West Brom, Wigan, Stoke, West Ham and Blackpool being the first five games, Chelsea should make a strong start even with all the fitness concerns.