in Match Report November 28, 2010 Comments Off on Newcastle United vs Chelsea: Match Report 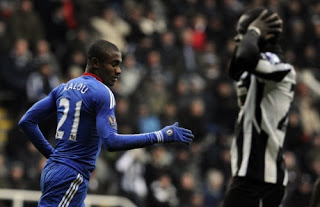 So Chelsea’s miserable form continues for another week. After such a spirited display against MSK Zilina in the Champions League, it looked like things were back on track finally. However, it seems that Newcastle had other things in mind than letting Chelsea win. The match started yet again in the same fashion, letting the opposition score. However, the goal didn’t have to do anything with Newcastle’s brilliant to play, but it was rather due to the lack of proper communication between the Alex and Petr Cech. A simple back pass let Andy Carroll
in for just a tap in. You just have to wonder the difference that John Terry would have made with this presence in that situation.

But Chelsea seemed to recover from the situation and passed the ball pretty well throughout the half. There were also a lot of chances and just when it looked like it was the Birmingham match all over again, Salomon Kalou scored a goal that took a slight deflection to go into the net. It was a deflection that was well-deserved. After that, you hope that the second half would be more of the same and Chelsea would stroll to win. It was exactly what happened, but Chelsea just couldn’t find a way through.

If you want a reason why Salomon Kalou doesn’t get too many games as a starter, you only have to look at his to misses in the past two games. How he manages to miss an open goal in two consecutive weekends continues to baffle me. The game once again stressed the importance Frank Lampard and John Terry to the club and also proved that the strikers can’t score as many goals if the supply isn’t good. Thanks can get only better from this position as Chelsea have just lost the top spot in the Premier league table to Manchester United. With the matches against Tottenham, Manchester United and Arsenal to come it really is a case of getting the big guns back.

Man of the Match: Ashley Cole