in Title Race December 8, 2010 Comments Off on Chelsea seek to kick start season at Marseille 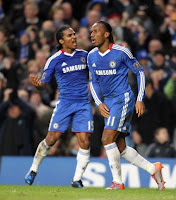 On the face of it Chelsea’s final Champions League group game against Marseille means nothing. Both side are already through – Chelsea as group winners – so the game is more of a formality than anything.

However, a run of just one win in six league games has seen them concede their place at the top of the Premier League table and such is their lack of confidence boss Carlo Ancelotti accused his players of being ‘scared’ in the second half draw with Everton on Saturday.

With Spurs, Arsenal and Man United lying in wait for the London club in
the coming weeks Ancelotti knows his players have to re-discover their form and quick. The game against Marseille – a dead rubber effectively – maybe just the sort of pressure-free environment they need to get things going again.

The Champions League has certainly been a happier hunting ground than the Premier League for Chelsea this season. They have won five games from five, bagging and impressive 14 goals and conceding just three. The Live scores have been pleasant reading for the Blues in Europe this season.

John Terry made his comeback from a back injury against Everton on Saturday and he may get another chance to work on his match fitness at the Stade Velodrome. The game still may be too soon for another one of Chelsea’s key injured players, Frank Lampard.

However, I wouldn’t be surprised if some other key first team players are involved either. Playing your way back into form is often the best solution.

Those following the Football live scores regularly should know that sometimes it takes just one result to kick start a campaign, no matter how that win comes about. Given their recent form a scrappy 1-0 win in a meaningless group game could prove to be Chelsea’s most important result of the season.