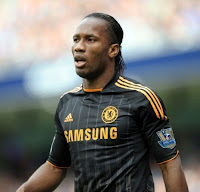 Didier Drogba has said that he has now recovered fully from the malaria illness and is now fit and raring to go. Drogba has not scored in the league since last scoring in the match against Arsenal. It was obvious that he was clearly struggling the last few weeks, and whether it was due to the illness or due to the obvious lack of form is the question that only Carlo Ancelotti can answer. Also, only Carlo Ancelotti can answer why he decided to persist with Drogba, who was clearly suffering from one of those problems.

It is not like we have performed well with Drogba in the team. With no wins in the last few matches, Carlo Ancelotti could have easily played either Daniel Sturridge. He is a striker who has been producing impressive performances of late and could have been just the striker who could have solved Chelsea’s goal scoring crisis. He is something different to what Chelsea have got already.

Anyway, with Drogba fully recovered, at least according to him, Chelsea now have the opportunity to go to the top of the table once again by beating Everton. This is because Manchester United’s match against Blackpool has been cancelled due to the weather. It is unlikely that such a situation would happen in London and especially at Stamford Bridge. So, with Manchester United not playing until at least next week, Chelsea have a fantastic chance to cement their place at the top of the table. All Chelsea needs to do is score some goals and win against Everton. Would Drogba be on the score sheet tomorrow?


Which channel is Chelsea v Everton shown? ESPN (India at 20:25)