in Match Preview December 4, 2010 Comments Off on Preview of Chelsea v Everton at Stamford Bridge 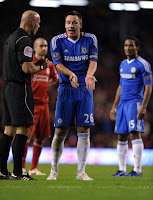 Chelsea welcome Everton to Stamford Bridge looking to regain some of the lost glory which has seen them win only two matches in their last six in the English Premier League. Last weekend’s 1-1 draw against Newcastle left them at the 2nd position in the league table, allowing Manchester United to bypass them into the first position, two points clear of the Blues.

But, there is some good news for the home team after all. Captain John Terry and influential midfielder Michael Essien might be available for this match, if they clear a late fitness test.

Chelsea need to get back to winning ways if they wish to usurp ManUnited
from the top of the table. The striking trio of Didier Drogba, Nicolas Anelka and Florent Malouda need to show a little more drive as lately the Chelsea attacks seem to fizzle out in the final third of the pitch.

The away side are also witness to a poor season so far, which sees them languishing at the 15th position in the league table. Last weekend, they suffered a humiliating 1-4 loss against newly promoted side West Bromwich Albion.

The spirits at the Everton camp are low and they will be hoping to stage a comeback sooner rather than later. Australian Tim Cahill has been the leading goalscorer for them this season, netting 8 times already.

He has to shoulder the responsibility of staging early attacks against the reigning Premier League champions. Playmaker midfielder Mikel Arteta is all set to miss this game due to suspension.