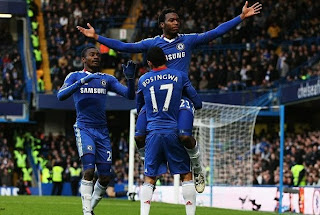 The rout has begun. Chelsea are finally back to the best as they thrashed Ipswich town by seven goals. So, does this mean that all of troubles that Carlo Ancelotti and his men faced until now are over? No, beating a managerless Ipswich town side that is struggling at the foot of the championship table is certainly not a big deal. But what it gives is some much-needed confidence to the players that they can actually score goals. Yes, score goals. Chelsea have scored just 10 goals in their last 13 games and it is a far cry from the days of scoring six or seven in a game. For the past few games, it looks like Chelsea have forgotten how to score goals.

This thrashing once again invokes some confidence into the players. The nervousness was initially felt amongst the fans and the players at the start. However, once Salomon Kalou scored it all seemed to vanish in one big go. Chelsea never really look back since then. Carlo Ancelotti has praised the efforts of his players, but said that he was not too overjoyed. It was nice to see Daniel Sturridge proving his worth and Frank Lampard once again in the scoresheet. The next match for Chelsea is at home to Blackburn and all this would count for nothing if the Blues don’t win against them.

Carlo Ancelotti said that winning the title from this position would be really difficult and I completely agree with him. Chelsea currently trail Manchester United by a whopping nine points and even in the best of seasons closing that gap is far from achievable. Especially given that Manchester United perform well in the second half of the season. So, it is best that Ancelotti decides to prioritise right now. The FA Cup and most importantly, the Champions league should be the trophies that Chelsea should be aiming for now. This victory gives the best platform for that. Taking this confidence into the lead and subsequently into the cup competitions is what Chelsea should be doing right now.