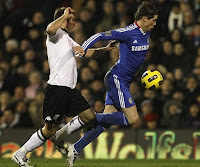 Carlo Ancelotti has said that he expects Fernando Torres to come good within a few matches. For anybody who saw the match against Fulham, it was a glimpse of the best of Fernando Torres that Chelsea paid £50 million for. Yes, he did not score any goals and in fact, he missed a few sitters . However, his performance came against Fulham in a very tight match. There was certainly not a great deal of joy for strikers of both teams. It was much better than the performance against Liverpool, where he was simply non-existent. How long will it take Torres to get back to his old self with Chelsea? It is difficult to answer given that Chelsea are in the middle of the season fighting for the fourth place with Tottenham.

So, there is every possibility that Ancelotti will not be willing to jeopardise his team’s place in the top four just for the sake of integrating both Torres and Didier Drogba into the same team. One should certainly not be surprised if any of the front three of Didier Drogba, Fernando Torres and Nicolas Anelka found themselves on the bench. It is highly unlikely that Ancelotti will be putting Torres in the substitute bench mainly because of the exorbitant fee that he has cost Chelsea. So, it is going to be either Didier Drogba or Nicolas Anelka who will have to make way for the Spaniard.

The sooner that Fernando Torres starts scoring goals, will be the better for him and the club, as the talk has already begun about Torres being a flop. Chelsea have already had the experience of a big signing becoming a flop in the form of Andrei Shevchenko, but there is a feeling that Fernando Torres will not go down the same route.