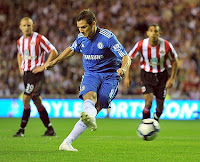 Given Chelsea’s form in the last few away games, no Chelsea fan would have been certainly been confident about tonight’s trip to the Stadium of light. However, the recent signings of Fernando Torres and David Luiz has once again signalled Chelsea’s intent of not only recapturing the title this season, but the subsequent seasons as well. It also removes any doubt regarding the commitment of Roman Abramovich to the club. Even though Fernando Torres and David Luiz will not be involved for the match, just their signings is expected to massively boost the performance of other players, i.e. Florent Malouda and Nicolas Anelka.

Nicolas Anelka and Florent Malouda have been extremely poor in the last few weeks. It is a massive drop from their lofty heights at the start of the season. With these signings, they will for sure know that their place in the team is certainly not guaranteed by any standards. To some extent, Didier Drogba has also been poor, but he seems to be picking up himself lately. The match against Everton clearly showed the lack of creativity in the team. However, it was similar to the Bolton game in midweek in terms of pace and commitment. Chelsea won the Bolton game quite comfortably due to Didier Drogba‘s involvement. It was clearly missing against Everton and whether it is due to the lack of competition remains to be seen.

Carlo Ancelotti has said that this game is all about revenge for the 3-0 defeat that we suffered at Stamford Bridge. Even though the defeat was bad, it was a defeat that was inflicted on a Chelsea team that was missing Frank Lampard, John Terry and Michael Essien. It will be Sunderland who will be weakened this time around by the loss of Darren Bent, but they do have new players in Stephane Sessegnon and Sulley Muntari. Carlo Ancelotti has said that he does not intend to make any changes to the side that faced Everton, even though Salomon Kalou scored a wonderful goal (mind you, it is not often you say that).

My prediction: Chelsea to win 3-1