in Transfer News May 18, 2011 Comments Off on Kaka Rules Out Chelsea; Aguero Once Again! 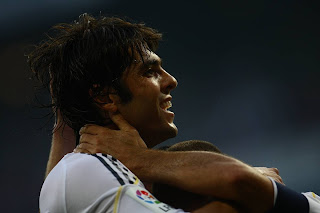 Kaka has dismissed the reports linking him with a move to Chelsea after categorically stating that only his mom would be moving to London to preach and not him. It is news that would be disappointing for Carlo Ancelotti more than anybody else, who would have been very eager to get the Brazilian superstar at Stamford Bridge.

Kaka has stated that his ambition is to stay in Spain and continue playing for Real Madrid, although you could easily recall the image of him sitting on the bench of Real Madrid. Plagued by injuries, Kaka would himself know that he is not the player he once was. So, this could actually be a bit of good news for Chelsea as it would mean that Ancelotti would have £30 million to spend on other players.

Sergio Aguero is a player who would come to the mind if you think of players capable of improving the team, but Atletico Madrid seem to be more intent on selling him just when he retires! Such is the long and protracted nature of the transfer story surrounding Sergio Aguero that I actually doubt if he would ever sign for another club. However, it has been reported in some papers today that Atletico Madrid would be willing to part with £30 million for the 22-year-old, which seems to be reasonable.

One thing that will be evident to you by this time will be the fact that it is almost only superstars that are being linked with Chelsea at the moment. It is not actually realistic to be thinking about Kaka, Aguero, Messi and Rooney all the time. In fact, I believe that Chelsea could do with signings that would benefit the team rather than sell shirts.

It is not like that there is a dearth of such players around. Look closer and you would find the likes of Charlie Adam and Peter Odemwingie. You might argue that these players don’t have the top level experience, but did Valencia have it before he signed for Manchester United?