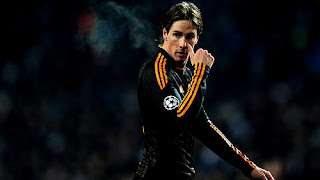 Chelsea will be taking on Manchester United at Old Trafford in what could be the biggest match of Chelsea’s season so far. It will probably decide the future of Carlo Ancelotti as reports have suggested that the Italian could be sacked if he loses to Manchester United on Sunday. The stakes are quite high at the moment as both sides still have the possibility of losing out on the title. Manchester United are by no means home and dry, while Chelsea have little to lose. The situation is pretty simple for Chelsea, who can overtake Man Utd with any sort of a win.

Of all the worries that could potentially be on Carlo Ancelotti’s mind at the moment, the question
that seems to be repeatedly fired at him has to be the striker situation. Does Ancelotti go for the pairing of Didier Drogba and Fernando Torres, or does he stick with the 4-3-3 that has been so rewarding in recent matches? It was the biggest conundrum during the second-leg Champions League quarter-finals, but Ancelotti failed miserably with his decisions that time around. However, situations have improved since then; with Torres scoring his first Chelsea goal and Chelsea threatening once again in the 4-3-3 formation.

Ever since the Torres was dropped in favour of the 4-3-3, Chelsea have fared better. So, all eyes will be on Ancelotti and his team selection. Weirdly, he seems to have adopted the same strategy once again by saying that the team selection is not that important. However, it is the way that the team plays matters the most. You may remember that it was the same kind of reply and the response he got from the team that brought curtains to Chelsea’s Champions League aspirations this season. Nobody can doubt that Chelsea are much better than Manchester United on recent form, but a whole lot hinges on the team selection and formation. If Torres is paired with Drogba upfront in a 4-2-2 formation, then United do have the upper hand especially with Howard Webb refereeing the match.

On the other hand, if Torres is dropped in favour of the 4-3-3, then Chelsea could well overtake United on goal difference and thus their hopes of a 19th title. There is no doubt that Torres is a world-class striker, but this is just not the moment for experimenting or trying to get the best out of him.