in Manager News June 1, 2011 Comments Off on Hiddink Ready For Chelsea Return

Guus Hiddink has finally come out with an open statement showing this intent to return to Chelsea. He is widely expected to quit the Turkey job after their match with Belgium tomorrow. Saying that he misses the day-to-day involvement of club management, he is expected to start contract negotiations with Roman Abramovich shortly. 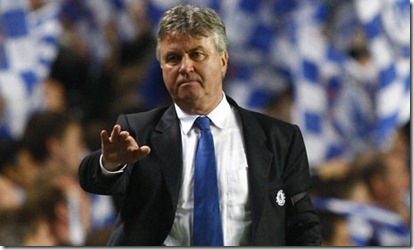 This certainly would not come as a shock to Chelsea fans as Hiddink has been the clear favourite have since Carlo Ancelotti was sacked.

“I never told anybody that I was going to continue working with Turkey. I feel energetic and I like working every day. I feel I need to do more, so a club role is more preferable than coaching a national team.”

Ian McGarry, a BBC journalist, has said that Chelsea could sign five more players in the summer. None of these are going to be done on the discretion of the manager, but Hiddink is probably the one manager who won’t have any troubles with that. The only trouble going for the new manager will come in the form of the compensation figure.

Guus Hiddink is expected to cost around £4 million to be relieved of the Turkey contract, in addition to the £6 million paid to Carlo Ancelotti. Nothing comes cheap at Chelsea isn’t it?

It is rather surprising to know that Hiddink is extremely popular at Chelsea, despite spending only three months at the club. Most of it was down to his persona and tactical knowledge that have reminded us of Mourinho at times. But will he be able to deliver the same the second time around?

After the short stint with Chelsea, he has failed as the manager of Russia and Turkey. Firstly, he failed to take Russia to the World Cup and now Turkey are in danger of not qualifying for the Euro 2012. So, has he lost the Midas touch? I don’t think so.