There is only about three weeks until the start of the new Premier League season. Despite the talk of several players like Luka Modric and Romelu Lukaku arriving at Stamford Bridge, Chelsea are yet to sign anyone. However, we could be on our way to the first signing of the summer, although Oriol Romeu is not the glamorous name you might have been hoping for. 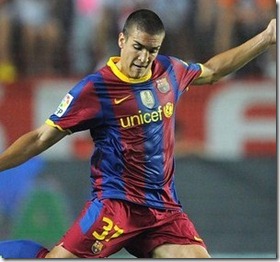 Even though Oriol Romeu plays for Barcelona, he is unlikely to be instantly recognised by the fans. However, Oriol Romeu is going to become the first signing of the Andre Villas-Boas era after Chelsea confirmed that Barcelona had accepted a fee of around £4.5 million for the youngster.

Andre Villas-Boas has been praising him a lot while on the Asian pre-season tour 2011, but let us be honest, if he is so good, Barcelona will not be letting him leave for cheap. Pence, this just looks like a signing to tide over the Michael Essien injury.

There is a pretty good chance that he might turn out to be extremely good, but I’m not going to bet anything on it. Oriol Romeu is currently on international duty with Spain’s Under-20 team and personal terms will be agreed once he arrives at London.

Meanwhile, our new signing, Thibaut Courtois has left the club even before joining! He has just left on a loan deal to Atletico Madrid, which is not something unusual for a Chelsea youngster. Thibaut Courtois will stay at Atletico Madrid for one year, and strangely, I believe that this move will be extremely good for the player.

Atletico Madrid have just lost their No.1 goalkeeper in the form of David de Gea to Manchester United. There is every reason for him to fight for a starting place at Atletico Madrid, which will give him valuable experience.