Chelsea’s pre-season for the Premier League 2011-2012 season has come to a close with various positives and negatives for new manager Andre Villas-Boas. It must have been great for him to see Fernando Torres finally score the goal, which has kept everyone waiting. The emergence of players like Slobodan Rajkovic, Daniel Sturridge, and Josh McEachran as being capable of playing in the first team on a regular basis is a real bonus. 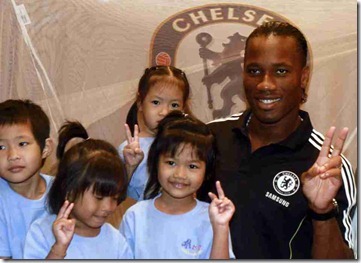 However, one must not read too much into this. Another positive has to be Torres scoring finally on this pre-season. The £50 million man has been ridiculed a lot in the press just for his price tag without actually looking at the overall picture. Even though it is more than six months since he arrived, he is finding his feet just now. It is still too early to judge him. Villas-Boas said,

“It has been training non-stop, trips non-stop, commercial activities non-stop and for the players to be able to show this mental and physical freshness and to put on the things we trained is something that leaves me very confident and optimistic. It has the value it has because the most important thing in the end is to win when we start the Premiership but its’ great to feel the group and the team together as we showed today.”

We may have played teams that are not at the same level as in the Premier League, but still, to not concede any goal on this pre-season tour so far is confidence inspiring.

On the negative front, the team failed to live up to the expectations when it comes to goal scoring, apart from the 4-0 score-line against Kitchee. Overall, the team was disjointed in the attacks and it was not a particularly convincing pre-season on this regard.

Last but not least, Villas-Boas has won his first trophy – Barclays Asia Trophy 2011 – , although it is very insignificant in comparisons with the Champions League or the Premier League.

However, we come away from the Asian tour 2011 with more positives than negatives. There is one more friendly remaining – against Rangers on 6th August – and a great result in that would be the perfect tonic to take on Stoke City on 14th August.