in Squad Updates July 8, 2011 Comments Off on Michael Essien Injured; Another Cruciate?

The first day of the new season starts with a disappointing news. Michael Essien could potentially miss a large part of the upcoming season after injuring his knee during training. Can it get any better? Just one day’s training has gone and already one major player is down injured. 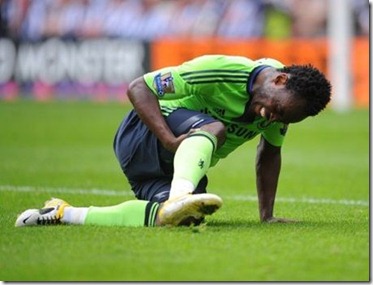 Many reports have been linking Michael Essien with moves to Inter Milan, but Chelsea have so far not made any interest public. Maybe now, Roman Abramovich will now regret the fact that he did not entertain any bids for Essien when he was fit and ready.

Do not get me wrong; Essien is a fantastic player. However, he is not really the same player he once used to be. This fact was perfectly evident in the last season, although it would be difficult to judge a player on one season alone. If you compared Essien’s current performance with his performances before getting the number of knee related injuries, it would not be comparable at all. His performances have degraded to such an extent that Ramires overshadowed Essien at times during last season.

Of course, he will return from this injury as he has done on previous occasions, but can he ever reach the high standards set prior to getting his first anterior cruciate ligament injury in 2008? I suppose not.

Chelsea can also be lucky with this injury, as the club has so far not revealed the details of the injury or the time of his expected return. Chelsea released the following statement:

“Michael suffered an injury to his right knee during training this week. He will undergo tests over the next few days to determine the extent of that injury. Until we have the full results of those tests we will not be commenting further.”

It could well turn out to be nothing more than a knock; I hope for the same.

Drogba To Be Offered A New Contract