Santos To Fight For Neymar

in Transfer News July 1, 2011 Comments Off on Santos To Fight For Neymar

Just a few days after confirming that there have been five bids for Neymar, Santos President has said that the wonder kid will now not be available for sale. I am sorry, but the whole point of a release clause is to make a player negotiate with an interested club without the consent of his parent club. Santos may request Neymar to consider staying at the club, but the 20-year-old would surely like to play for the best clubs in Europe. 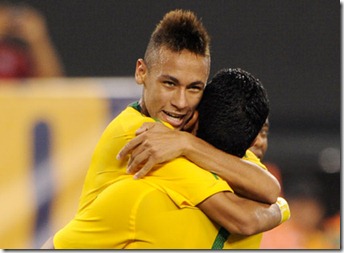 Santos President Luis Alvaro de Oliveira Ribeiro said a few days ago that five clubs had met the asking price of Neymar. It is thought that Chelsea were among them. The sudden change in mind suggests that something is not perfect within the organisational structure of the club. Is Neymar worth pursuing despite all these troubles? He seems to be according to pundits who think that he is even better than Robinho at the same age.

Only time will tell if he will emulate the achievements of the great Pele, but for that he has to move to Europe. Despite playing only in his homeland, Pele is considered. Neymar may not be that lucky as times have certainly changed. Neymar may consider staying, but that would be to only play in the Club World Cup against Barcelona.

So, will he come or not? I think he will come to Europe, but will it be to Chelsea? That is the difficult question as a number of clubs like Barcelona, Real Madrid make the situation tough indeed. So often than not, English clubs have lost to Spanish counterparts when it comes to luring Spanish players. I just hope that it isn’t the case with Neymar as he is one special player.