A few days ago, Andre Villas-Boas said that Chelsea need to sign two more players before the end of the transfer window. Now, Chelsea could not have been much quicker in fulfilling half of the statement after agreeing a £23.5 million deal to sign Valencia winger Juan Mata. 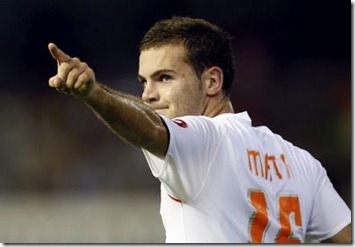 “An agreement has been reached with Valencia CF for the transfer to Chelsea of midfielder Juan Manuel Mata. The move is now subject to the player passing a medical and agreeing personal terms.”

He is just the sort of the player we need right now. The pace and skill are second to none and he will perfectly complement Florent Malouda. I expect Villas-Boas to play Mata on the right-hand side, with Malouda hugging the left wing.

One of the reasons why the 4-3-3 formation has been slightly ineffective over the years is due to the lack of proper wingers. Ever since we sold Arjen Robben in 2007, Chelsea have never replaced him. Up until now, converting strikers like Anelka and Kalou into wingers has worked on occasions, but it has been largely hit and miss.

Juan Mata is the perfect player we need right now, and the fee of £23.5 million does not sound a lot for a player who is only 23 years old now. He has the best years ahead of him and he can only get better.

Here is a short clip showing what he can do:

I would especially recommend watching at 0:48. It is exactly the sort of play that we used to get from Robben.