Andre Villas-Boas will take charge of his first official game as the Chelsea manager, but he could not have opted for a much worse fixture than Stoke on the opening day of the season. It could have been well and good if Chelsea were playing at home, but the Britannia Stadium is always one of the tough grounds for visiting teams. 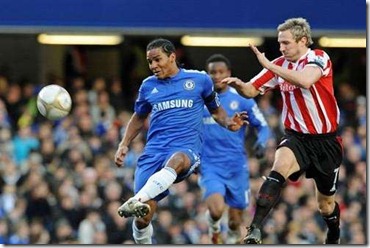 Stoke have changed their style of play a little, with the addition of wingers like Pennant and Matthew Etherington. Hence, they can either hit with the long ball from Rory Delap or they could cross the balls to inflict the same kind of danger.

The selection headache that caused a lot of problems for Carlo Ancelotti after the arrival of Fernando Torres does remain for the match against Stoke. Torres was doubtful for the game after getting injured while on international duty with Spain. However, he seems to have recovered sufficiently to take part in the match, although it remains to be seen if Villas-Boas will actually take him over Drogba.

Drogba has not played much as a starter during the pre-season and the match against Stoke will probably be a clear indication of where Villas-Boas places him in the context of the current Chelsea team. With no great transfer activity in the summer so far, there is very little to see any spark within the team. If Torres manages revives himself, he would certainly feel like a new signing.

Stoke will certainly give Chelsea some problems, but it is not something new for the current crop of Chelsea players. Also, we have managed to avoid defeat at the Britannia Stadium for the last 10 times that we have visited there. Given the way that the team performed in pre-season, it is highly unlikely that Chelsea will come back without all three points.

Even though we have a fully fit squad, I am extremely disappointed that Daniel Sturridge is suspended for the match. He has been extremely good in pre-season and I cannot wait to see him this season.