Andre Villas-Boas has once again confirmed that Chelsea are trying to sign two players in the transfer window. No prizes for guessing who one of them will be, as we have been linked with Modric for quite a while now. Andre Villas-Boas revealed to Skysports that he would also like to buy a winger. 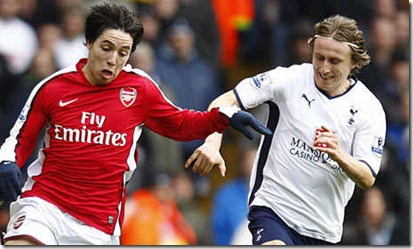 One thing that does seem to be certain is that Chelsea are clearly not interested in signing a British player for now. Back under the José Mourinho days, Chelsea often had a lot of England internationals like Joe Cole, Shaun Wright Phillips, and Wayne bridge in addition to the current crop.

As of now, though, we have only three players who now play for the England national team. Just when having a home grown player in the squad is of primary importance, Chelsea seem to be interested in signing only foreign players.

Either way, it looks like Luka Modric will be joining Chelsea after all. According to Daily Mail, Tottenham are reportedly interested in considering an offer in the region of £35 million, which seems fair enough for a player who has five years left on his contract.

Villas-Boas also dropped a hint that Chelsea could try and sign Samir Nasri under the noses of Manchester City. City are thought to have agreed a £25 million fee for Samir Nasri, but the Frenchman is a player well worth pursuing considering that he is cheaper and also much better – in my opinion – than Luka Modric.

Villas-Boas failed to reveal the winger whom Chelsea are apparently interested in. Alexis Sanchez was linked with a move to Stamford Bridge, but he has signed for Barcelona. Maybe, Villas-Boas will turn to his former club FC Porto, but it could well be Neymar back in the frame after assistant manager Roberto di Matteo was seen scouting the Brazilian in a recent international match.