Just when you thought that it could not get worse for Fernando Torres, he is once again set to warm up the bench for the match against Bayer Leverkusen. The first match of the Champions League group stages will also see the return of Michael Ballack to Stamford Bridge. It is quite a momentous occasion for the German midfielder who spent four years with Chelsea, although it wasn’t as successful as he would have hoped. 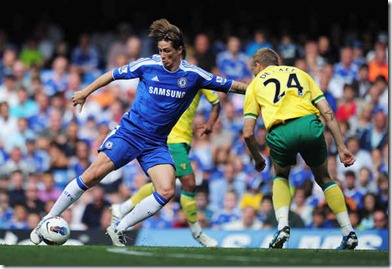 The Champions League has become more than Holy Grail for Chelsea and Roman Abramovich, but I am certainly tired of watching every season’s hopes turn to dust. It looks as if the failures of recent seasons has become a mental block in many ways. The only way to eliminate this mental block will be to go by a game as it comes without setting any goals as such. Here is what Villas-Boas said in the press conference ahead of the Bayer Leverkusen match:

“I don’t think there’s a mental block. There’s some kind of unpredictability that can take you all the way to the final sometimes. Other times it doesn’t.

Our time will eventually come. We just have to focus on making it one of our objectives, as it has been for the past few seasons.”

Chelsea finally seem to be coming into form, as demonstrated by the consistent performance against Sunderland. It was probably the first match, in which they played for the full 90 min. Villas-Boas will certainly want that to continue against Bayer Leverkusen as well, although the Manchester United match on Sunday will certainly be on his mind. The Sun reports that Lampard, Terry, and Anelka will be left out of the squad with this game in mind.

We are already without Ramires and Drogba, and resting these three experienced players may put Chelsea at a slight disadvantage. Without Drogba and Anelka, Torres should be the next in line to start. However, the comments he made recently about the team has certainly singled out the Spaniard. Torres claimed that the Chelsea midfielders had become old and were very slow, which is something that I agree with, but it seems that the club has decided to take action.

Bayer Leverkusen finished as the runners up last season, and they look on course to repeating the feat. It is certainly going to be a difficult match, but Chelsea have the strength in depth to overcome Bayer Leverkusen, who are certainly not short of confidence.

My prediction: Chelsea to win 2-0