Chelsea have showed against Swansea that the defeat against Manchester United was simply down to luck more than anything else. The 4-1 win is made even better knowing that we played for most of the game with 10 men, as against Fulham in the Carling cup. 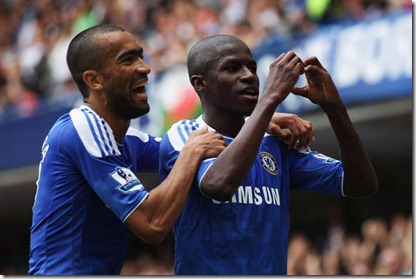 Fernando Torres started where he left off by scoring quite a brilliant goal to get things started at Stamford Bridge. However, his afternoon was to last only 40 min after receiving a red card for his two footed challenge on Mark Gower.

It was a huge blunder, but it clearly looking like a striker’s challenge more than anything else. Torres was having a good impact, and it is sad to see him miss the next three matches. AVB, however, does not seem to be short of goal scorers, but none would have imagined Ramires being one.

His start to life at Chelsea was slow, but he is becoming one of the important players of the team. His first goal signified everything that is good about him now – counter-attacking football and energy. These two are in abundance with the Brazilian youngster, and Chelsea made full utilisation of it.

Didier Drogba came on late in the match to score an important goal. Drogba will be the leading man in the next few matches, and it is vital that he gets a lot of confidence from the goal. It seemed as if he was never missing from the team.

The worrying aspect from the Swansea match has to be the inability to keep a clean sheet. We have kept only two clean sheets so far this campaign, while the goal we conceded against Swansea has almost an exact replica of Chris Smalling’s goal last week. Clearly, there’s a lot of work to be done in the defensive side of things, especially set pieces.

Further, Villas-Boas has to work out a policy in order to make the defensive midfielder a bit more effective. John obi Mikel – playing in the defensive role – was so poor that he often was responsible for slowing down Chelsea’s play. At home, Meireles seems a much better fit in that role, or even Josh McEachran for that matter.

Man of the match: Ramires – outstanding on the ball, brilliant runs, good passing, and last but not least, two goals to the good.