The score line does not always tell the story and the 3-1 defeat against Manchester United was certainly a case of one. Despite the defeat, it definitely ranks as one of the best games I have seen Chelsea play in recent times. There were chances aplenty for both sides and it was largely due to the inept defending from both teams. Even though Chelsea conceded three goals, our defending was rather well in comparison with Manchester United’s defence. 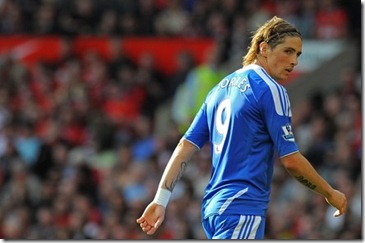 Chelsea were clearly the better team when it came to creating chances, but not so good in terms of taking them. In fact, Manchester United had three shots on target and scored three goals in the first half, whereas Chelsea had almost 5 clear-cut chances and failed to score none.

People seem to be intent on criticising Fernando Torres, but one of the greatest disappointments has to be Lampard. Of course, Lampard covered a lot of ground, but effectiveness matters more than distance covered. Lampard was not defending well, nor was he involved in attack. AVB took the right decision in taking off Lampard at the end of the first half, with Anelka introduced in place of him.

It produced an instant result, as Anelka fed an quite impressive ball to Fernando Torres, who finished quite impressively. Torres was heavily involved in the first half, but it was the first major time he showed glimpses of his old self. From then on in, it turned out to be one of the most engrossing encounters in recent times, as both teams decided to totally forget defending. United received a penalty, which they failed to convert, thus giving a lifeline for Chelsea with the game at 3-1.

However, any hopes of getting something from the game completely evaporated from both fans and players after one of the greatest misses of all times. Fernando Torres put through on goal by Ramires jinked past the oncoming David De Gea, thus creating an open goal. Then, one of the most astonishing moments happened as he failed to miss from about seven yards. The miss was so catastrophic that it seemed to suck out the will to get an equaliser.

A 3-1 defeat may sound extremely bad on Chelsea’s part, but it should not take anything away from the huge number of positives. Chelsea may be trailing Manchester United by five points, but on this display alone, I can say that the title race is clearly not over.