Sunderland vs Chelsea Match Review: Do Or Die For Torres

in Match Preview September 10, 2011 Comments Off on Sunderland vs Chelsea Match Review: Do Or Die For Torres

Despite facing the so-called lower opposition in the first three matches, Chelsea have certainly failed to convince that we are indeed the main competitors to Manchester United for the title, although we have managed to get seven points out of a maximum nine. It is a decent return, but one that cannot be compared with the kind of performances that Manchester City and Manchester United have been putting. 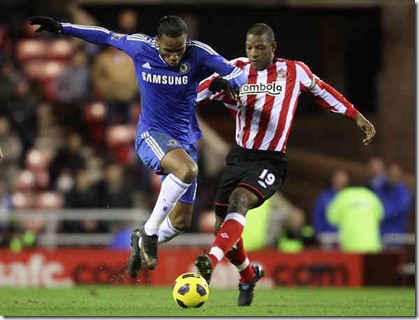 However, the value of three points will be evident only when you don’t get it, and I for one, am extremely happy with the start Chelsea have made this season.

It is of paramount importance that Chelsea get three points against our next opponents Sunderland given that we face Manchester United next weekend. It is probably a good time to play Sunderland, who certainly have not started the season in the way Steve Bruce would want them to, despite spending a lot of money in the summer.

It has been 10 years since Chelsea last dropped points at the Stadium of Light, and given Sunderland’s poor form, I expect Chelsea to fully run out comfortable winners.

For once, Andre Villas-Boas will not have the selection headache when it comes to the central strikers, as Drogba has been ruled out of the match. He does have Daniel Sturridge back into contention for selection, and he is one player I am expecting a lot from this season. He was by far and away the best player in the pre-season, and he will certainly inject a lot of pace into the team.

Kieran Richardson has been playing in the defence for Sunderland, and it is certainly a weak spot that can be taken targeted. His positioning and tackling was totally out of order against Liverpool, and players like Mata and Sturridge could take advantage of it.

Chelsea have failed to keep a clean sheet since losing Petr Cech to injury, but his return should provide the balance to the defence.

Despite the poor form, Sunderland should not be taken lightly, as they showed in the 3-0 defeat that they inflicted to us at Stamford Bridge last season.