Plato and Jones earned the runners up and the 2nd runners up award respectively.
2010 has been a remarkable year for the youngster in which he helped England win the U-17 tournament in Spain, started with the Chelsea first team in a UEFA Champions League match and also earned a call-up to the England U-21 squad.

McEachran, who has been born and brought up in Kirtlington, Oxfordshire, received this award in his hometown which was the icing on the cake.

An obviously delighted McEachran spoke to the press after receiving the award. “It’s the first award I’ve ever won, and I’m so pleased to have got it in my hometown.” About his season with Chelsea, he commented, “It has been great to play for Chelsea this season. It’s such a great thrill to be involved with such a big club. Hopefully, we can win the Premier League as well as the Champions League.”

In his short career, he has already impressed his coach and a vast majority of Chelsea supporters. In support of the young lad, Chelsea manager Carlo Ancellotti quipped after the Champions League match against Zilina, ”He showed his quality. He was good defensively, won a lot of tackles. And obviously, with the ball he is fantastic.”

With such support from everybody around him, we can only expect miracles out of the 17-year old player. 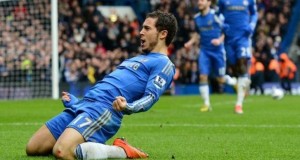