As Chelsea prepare to face Manchester United in the space of a few weeks, Guus Hiddink will be hoping to avoid yet another draw. The 0-0 draw between the two teams at Old Trafford towards the end of 2015 does not speak volumes about the entertaining nature of the game. However, Chelsea have been involved in a number of stalemates (five in nine games) since the arrival of Hiddink and this is something that the manager would be concerned about.

The damage may have already been done with the top four looking out of reach. Arsenal occupy the fourth spot and they are a whopping 16 points ahead with only 14 games left. Football news does not expect the blues to finish in the top four this season.

Chelsea, then, are only playing for pride in the remainder of the league season. Restoring the pride is certainly possible against an opposition like United, who recently ended a run of four away matches without a win with a 1-0 smash and grab against Liverpool.

Unable to cope with the tight schedule of matches in the last two months, Chelsea’s squad has been showing signs of weaknesses with a number of players on the sidelines. Hiddink confirmed that players like Falcao, Loic Remy, and Pedro may be unavailable. The departure of Ramires in the January transfer window further reduces squad strength. It is amplified by the absence of Alexandre Pato, who may have some way to go before having the required match fitness. He said:

“The squad is looking okay after the game against Watford. The players have come back in and look very fit, except for Falcao and Remy. Remy will be involved next week.

“Pedro was not available then because of a groin injury but he trained well this morning and we will see how he reacts to it. I don’t think there will be big problems.”

Still, it is not all doom and gloom since Eden Hazard is certainly on his way back after having scored his first goal of the season.

After struggling to score goals throughout the season, United have suddenly scored three goals in back-to-back matches. Their attackers will be in buoyant mood against the Chelsea defence, which has been exposed in a number of situations. 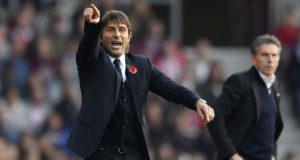